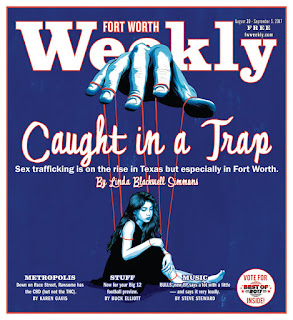 Last week, I attended the Fort Worth Police’s TC 5-Stones Taskforce meeting where we had the privilege of listening to the intelligence-driven human trafficking advocacy organization, Praesidium Partners’ Director of Strategy and Operations Elizabeth Ranade Janis’ presentation on illicit massage businesses. This presentation did an outstanding job at highlighting the necessity for the public to embrace the responsibility of taking action by reporting any suspicion of human sex or labor trafficking. In discussing the ways in which victims are trafficked, her point on financial isolation through imposing debt bondage on victims is one that inspired change within me personally that very day.

Prior to this presentation, we as a class have acquired knowledge as to the way’s in which victims are isolated from the rest of the population when working in the United States by businesses such as illicit massage parlors. However, after listening to Janis’ presentation she connected that the victims are hesitant to reach out and trust other members in the community because a large reason as to why the victims ended up being trafficked in the first place is because they trusted someone who promised they would take care of them, which did not end up happening. So why would they trust another American who thinks they have the victims best interest in mind?

Hearing this state of isolation presented in this way changed me personally because of the way it made me realize that taking a 3-hour credit college course was a good start, but not enough to actually be making a difference in the lives of those who have escaped their respective pimp but have no place to go due to the language barrier present and isolation they have been experiencing from society since arriving in the states. This presentation from Elizabeth Janis sparked inspiration within me to find a stable and trustworthy solution for victims trying to escape vicious trafficking situations but who are unable to due to the lack of trust they can place in others because of the psychological coercion they experienced when being recruited to the United States.

We were told to think BIG in class when discussing how we can continue the fight against Human Trafficking in our respective post-graduate occupations, so I am thinking BIG for this idea as well. While there are currently organizations in Dallas who operate as a place for victims to recover and be taken care of before figuring out the next steps towards recovery and a better life, I want to implement a program into these types of organizations across the country where a group of men builds positive relationships with victims over a period of time to ensure them that not all men in this world are not going to treat them the way in which they were treated by their pimps. The energy in the TC 5-Stones Taskforce meeting was encouraging as a first-time visitor because of how visible it was that everyone in the room wanted to combat this issue head-on and locate solutions to end domestic trafficking so through this visit I was able to recognize that I was not content with the amount I was personally doing to combat trafficking, which in turn lead to the creation of this hopeful post-graduate pursuit.

My two other classmates and I were by far the youngest participants in this meeting but witnessing so many members of my Tarrant County community passionately vocalize ways in which they wanted to help in combatting human trafficking challenged me to never let my age of being a “college kid” or “new employee trying to get situated” as an excuse to not pursue projects such as the one mentioned above that I would like to implement into recovery programs for victims of trafficking.  The longer that I remain inactive in combatting human trafficking with ideas that come to mind and distance myself from the content I have learned in our Human Trafficking course, the less likely it is that I will actually end up making any of what I have discussed come to light. I have accepted this challenge and reached out to Elizabeth Janis thanking her for her presentation and asking for her opinion on the effectiveness of a program such as this and what my first steps should be in making this happen.

Worth Mentioning: Dr. Bouche was cited and properly credited for information used on Elizabeth’s PowerPoint presentation.