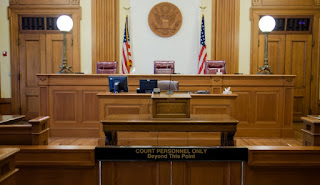 Tim Curry Criminal Justice Center, specifically Judge Carr’s court room, is serving as a catalyst for change in Tarrant County. On April 17th, 2019, I sat in a court room and observed a program called RISE.  The RISEprogram is specifically focused on the rehabilitation of women who have been placed in jail on prostitution charges and released under the stipulation of abiding by the program’s rules and requirements. Before taking my human trafficking class I had volunteered with The Net’s Purchased Program. This program informed me of The Net’s view on prostitution. They do not see prostitution as a choice for women but rather a violation of their inherent rights and a form of human trafficking as defined by the TVPA, a document I have had the opportunity to study in class.
Going in I had no idea what to expect. I had never been to court, and honestly, I assumed there would be parole officers, guards and other indications that these women had been in jail. This was far from reality. The court room appeared to be like any other, with no windows and blank walls. It was quite obviously a place where joy, grace and celebration were not common. The difference was the present judge and the women checking in. There was an obvious sense of freedom and accomplishment seeping out of the people in that court room. It was apparent that the women there were supported and empowered to change their lives, but it also quickly became obvious that no one was going to do it for them. That hard work toward sustainably successful lives was necessary on their part. This was most apparent through their references to several women who had been arrested in court the week before and through spoken testimony of one of the women who simply said, “I have no choice to fail, anymore. I have too many people relying on me and I can do better.”
Sitting through RISE allowed me to reflect on failure. The inherent privilege I have through the color of my skin, the family I was born into and the university I attend have all reinforced this privilege, and with it the ability to fail with a safety net. I am not different than the women in the court room for any reason other than luck. They have no room for failure, and realistically that is a mentality I should employ, with grace, going into my own future. People do what they must in order to survive, for many failure is not an option. They work hard and get by as a result of their effort. People move forward towards goals and dreams. As I have learned this semester in my human trafficking class at TCU, there are push and pull factors that aid in women being introduced to prostitution, these women are not moving toward the dream of prostitution but rather freedom. We have also learned that without rehabilitation, those same pull factors will create unbreakable cycles in their lives. The RISE program empowers women to work through failure and come out successful and known.