On April 23rd, I had the pleasure of participating in the Net’s Jail Outreach program. The weekly jail outreach program helps the women remember their inherent value and helps give them support when it feels like they have no one.  The jail outreach started with the leader giving the volunteers a little summery of the women they will be talking to, followed by prayer. A lot of the volunteers were able to speak to the same women that they had spoken to before, which allowed them to actually build a relationship with the women. Although I was not able to go back and talk to any of the women in jail, I was able to hear their stories.

When we learn about the statistics in class, read articles and books about human trafficking and talk about the great issues in our judicial system, I comprehend it, but then I put it away in mind. When you hear all the glaring statistics you want to think it’s somewhere far away. Even when we hear multiple stories in class I compartmentalize the stories, I tell myself that we only go over the worst of the worst in class so that the concepts really stick with us. 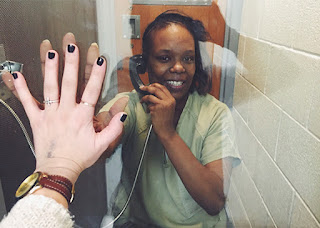 When hearing the jail outreach stories, I was forced to face the reality that the stories we hear in class aren’t outliers. Seeing how excited the volunteers were when we were going to the jail, and then seeing the defeated looks on their faces when they were done talking to the women really put the issues in perspective for me. The volunteers weren’t all defeated but the ones that were said that at this point it was just hard to have faith in our criminal justice system, and no matter how defeating it is, it makes them want to keep coming back. The volunteers stated that it is just hard to hear over and over again that these women are not getting fair treatment under the law, and they are not given the love and support they deserve. Not only did thestories magnify the problem in my mind, but also they made it so I could no longer compartmentalize the problem.